Site is currently being updated – check back soon! 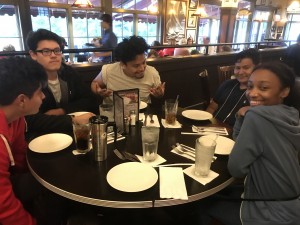 A note from Carl Foster, Director of LBH:

Seven years ago I sat in the LBH office with our deputy director and social worker and hatched a plan.  Lets ask the moms of our current fifth graders to let them all switch to the same middle school, a school selected by us, that would leave their kids much better prepared for college. For those parents who might struggle with the process we promised to be there for every step of the way and to help with paper work and other details needed to have their child admitted to the better school.

Some of those moms didn’t even speak English.  We promised a lot, but to me the most important thing we promised was that we would still be here graduation year and we would help raise money for college.

The mom’s reactions varied and would make a great long story for another day. But let me give two examples from opposite ends of the scale.  One mom was thrilled (only one) but eventually sat crying in our office because she feared she couldn’t meet all of the admissions requirements.  We helped and her child was admitted. Of all our moms, over time, this mom in particular has proven to be the foremost advocate for her child’s advanced education.

On the other end of the scale, we had a mom that said no because she would need the sixth grader to go to the same school as her younger children so the older child could walk her siblings home after school.   The better school we proposed had a longer hours which would make it difficult for the 6th grader to continue as caregiver for the siblings home after school.  Even though mom didn’t have a job and could pick her kids up herself. We responded to the moms concerns by adding the siblings in our after-school program, which meant WE picked them up, helped them with their homework and drove them home.  Like everything else we’ve done for our families, this would cost the mom nothing.

I nicknamed this group “The Original Six”.  That was 2010. It’s 2017 and the “original Six” have graduated.  All of the original six had grades good enough to get into some of the nations best colleges. They are all so proud of themselves. They were shocked when I said I would not attend any of the high school graduation ceremonies.  I said “High school is not the gold I am looking for.  With high school out of the way, I am officially requesting the first ticket to your college graduation.”

The other day at the LBH, in the same room that was my office seven years ago, where seven years ago we hatched the plan, that became the “original six”  I handed an agency credit card to Mary, our current intern/staff and asked her to go into the next room with one of the original six and pay his tuition on line. One at a time each of the LBH class of 2017 went into that room and had their tuition paid. Each walked out with a big smile on their face.

Back in 2010 when I promised the moms we would help pay for college, what I meant was we would help the kids look for scholarships. I didn’t mean we could write a check for everyone for all four years. But we’ve got enough money to get them all started. We still can’t do that. But we got everyone through high school. Everyone is in college and no one has taken out any loans.  We could use some help looking for scholarships and paying tuition over the next few years and we have four more in the class of 2018. But for now this is a great start…..fabulous in fact. Still for me, having been here in the beginning of the LBH, there is something wonderfully full circle about being the agency founded to house abandoned infants and 25 years later paying college tuition for a group of our just-graduated high school seniors.  I can only compare this feeling to the one I’ve known for each of our adoptions.

While sending a small batch of kids off to start college and finding permanent homes for a handful of young children may not seem like much of a return on all the efforts and resources spent over the years , the positive, life-changing effects on the futures of these LBH graduates is priceless.  These stories are the inspiration and foundation of our continuing work started so long ago.

Going into this I thought,  like most people,  that the major barriers keeping poor children from traditionally dependent families out of college are financial resources and/or poor academic standing.  We’ve done our part to break down those walls and I can state categorically that NO LBH kid is missing college because of money or poor grades. In fact while all of our kids are going to quality schools, all of them had academic standing high enough to get into even more exclusive schools.

For instance one of our kids got herself into a school I suggested she not apply to because it was so expensive. She not only got in but received a full scholarship.  She did that, not us. This is the student that concerned me the most because her family situation was so challenging it literally brought me to tears more than once since I first met her as a 9 year old. I could tell when things were bad at home just by looking in her face and now she has options.

The second item on my list of what keeps kids from succeeding is the lack of basic skills.  So much of getting these kids ready for college was talking to them about the importance of appearance, punctuality, follow-through, follow-up and staying in the game after a disappointment. We’ve worked hard to help these kids gain simple academic and social competence, to listen for substance in a conversation, to follow directions, to identify an opportunity when it presents itself and to walk through a door when it opened for them.

Once when I was complaining, Stephanie Hespe (summer staff and now licensed school counselor)  pointed out to me  “Carl none of our girls are pregnant.  None of our boys have been arrested (almost true) and none of our kids are abusing substances”.  We regularly get compliments on how they behave and how they show respect. I agree.  We’ve had great success and as Jefferson points out, even when things are going well I find things to complain about and keep pushing them.  Plead guilty to that but I also take credit for just one thing, making sure that our kids think about and talk about and prepare for an education beyond high school.  I have emphasized that college is something you have to plan for, prepare for and save for. Nothing is automatic and none of it is free. I need them to know that they can’t take anything for granted.

Last Sunday I drove to a Starbucks on a local college campus just down the street and left a $50 gift card for one of my LBH kids living on campus and away from home for the first time. I texted and told her it was there. In my head I could see a situation where she is talking with a group of girls after class and someone says “Let’s go to Starbucks” and she has to make an excuse and head back to the dorm cause she doesn’t have any money.  I remember how that feels and I’m not going to let it happen to her.

We are currently working to secure additional college funding for the students in our program. If you would like to learn more about the kids in our program and find out how you can help, see Our Kids.

The Little Blue House strives to obtain specific outcomes for participants in our youth-related programs: children are ready for school (i.e. to attend on time, every day, and participate in learning); children are able to invest in trusting relationships, based on their own growing ability to be responsible and accountable (and recognize that behavior in others); and children are able to articulate thoughts and feelings about their environment (neighborhood), and to understand and choose among positive and negative influences.